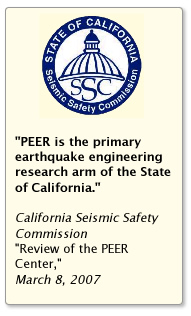 California has the greatest seismic risk exposure of any state in the country. The average annual projected losses to the building stock alone are estimated by FEMA at approximately $3.3 billion in California, or approximately 75% of all the known annualized seismic risk of the entire country. This is due to the combination of high seismicity and high concentration of population and associated businesses and industry in seismically active areas.

The PEER Center's research and technology transfer activities benefit the State by helping to systematically reduce seismic risk through the development of performance-based earthquake engineering technologies and products, the transfer of the results of the Center's research to the public and private sectors, and in the training of future students, engineers and researchers.

Major PEER Center activities that have made a significant impact include:

These activities have come from both the Core Program and the Lifelines Program of the PEER Center.

Specific products now in widespread use in California include:

It is expected that the PEER Center's current major efforts in earthquake damage assessment for bridges, buildings and electrical equipment, as well as new ground motion intensity tools will be completed by 2006. As a result, advanced planning for new projects is underway at the PEER Center. The general direction of the new projects is anticipated to take advantage of the establishment of the Network for Earthquake Engineering Simulation (NEES), more active interaction between the PEER Center and other earthquake centers worldwide, implementation of the PEER performance-based earthquake methodology in specific applications such as highrise buildings, and guidance and support from the State of California.

In addition to its research agenda, PEER contributes to California through the education of future generations of earthquake practitioners who benefit from the latest ideas and technologies, and who will bring to California a multi-disciplinary, results-driven approach to risk mitigation activities.