UC Berkeley graduate student Catherine Whyte applied and was selected to receive sponsorship from PEER to attend the 2009 ANCER Workshop on August 13-14, 2009 at the University of Illinois at Urbana-Champaign. https://netfiles.uiuc.edu/vlna/maec/ANCER2009.htm.

Catherine orally presented her research "Optimization of Simulation Time Step for Distributed Hybrid Testing between University of California  Berkeley and University of Auckland." According to Catherine her involvement in the conference was very beneficial: "The ANCER Conference was a great opportunity to present the research we did with hybrid simulation between Berkeley and New Zealand using OpenSees and OpenFresco. Since the conference was small, I was able to interact with and receive feedback from many of the graduate students and professors. I hope this will lead to greater interest in using OpenFresco for hybrid simulation at other universities." 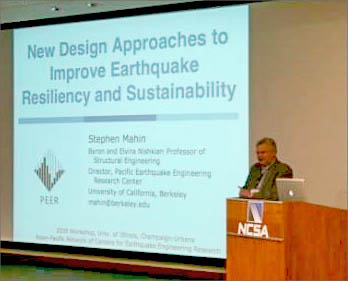