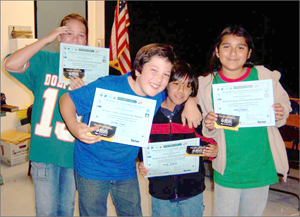 More than 1,100 5th and 6th grade students from Escondido and Del Mar schools, in the San Diego, Calif. area, recently put their structural design skills to the test. The students were part of a competition run by the Society of Civil and Structural Engineers at the University of California, San Diegoa student chapter of both the American Society of Civil Engineers (ASCE) and the Structural Engineers Association (SEA)in which they formed teams as design builders and constructed model steel buildings using K'NEX, a construction toy consisting of interconnecting plastic rods and connectors. (Turner Construction, Hope Engineering, and Architects Delawie Wilkes Rodrigues Barker funded the event's outreach.)

The role-playing exercise allowed the students to learn and balance the roles of architect, engineer, and contractor as a design-build team, and learn about earthquakes, earthquake engineering, and the AEC industry. In addition, the students learned about liquefaction, base isolation, damping systems, the concept of ductility, buckling, and about bracing, on top of basic engineering concepts.

As part of the scenario, event judges played the role of a prospective owner who wanted a tall and distinctive new highrise building in downtown San Diego, near an active fault. The owner would choose the design with the best money-making potential, in terms of rent, and the best seismic performance.

The teams produced construction documents, architectural renderings, a bill of materials, and even performed basic structural calculations. Once their designs came to fruition, they put their buildings to the test at UCSD's Englekirk Structural Engineering Center, on the world's largest outdoor shaketable (provided by the Network for Earthquake Engineering Simulation, the competition's co-sponsor.)

There was one overall winning team at each of the participating schools, and winning teams in three other categories: structural, architectural, and construction.

"As this is the first year of the event, we have learned a great deal about how to improve the curriculum and competition for next year," said Philip Yu, a past president of SCES-ASCE/SEA's student chap-ter at UCSD. "We have also learned that 5th and 6th grade students are capable of amazing work."